In conjunction with the year-long exhibition project examining Brown University’s lost Jenks Museum, the John Nicholas Brown Center for Public Humanities and Cultural Heritage, the Haffenreffer Museum of Anthropology, and the John Carter Brown Library invite paper proposals for a colloquium on lost artifacts, collections and museums. The colloquium will be held at Brown University May 7 and 8, 2015.

Museums, perhaps more than any other institutions, think in the very long term: collections are forever. But the history of museums is more complicated than that. Museums disappear for many reasons, from changing ideas about what’s worth saving to the devastation of war. Museum collections disappear: deaccessioned, traded away, repatriated, lost to changing interests and the ravages of time.

We are interested in this process of decline and decay, the taphonomy of institutions and collections, as a way of shedding light not only on the history of museums and libraries…

The class is over, but if you’d like to keep exploring: the Information Visualization Massively Open Online Course (IVMOOC), offered by the Cyberinfrastructure for Network Science (CNS) Center at the School of Informatics and Computing, Indiana University, is starting up. It runs this year from January 28 to April 14, 2014. Here’s a description:

The course provides an overview about the state of the art in information visualization, and teaches the process of producing effective visualizations that take the needs of users into account. The target audience is graduate students able to work three to six hours per week. Students will learn basic concepts, practical skills, and team project development. Everybody who registers gains instant free access to the Scholarly Database (26 million paper, patent and grant records) and the Sci2 Tool(180+ algorithms and tools).

Just a reminder that I will be in the DSL this afternoon if you’d like to meet with me about your projects. The rest of my week almost completely booked, so I strongly suggest you take this opportunity to meet if you have questions or need help with your project.

You should all be finishing up work on your final papers/projects! Please contact Massimo, Jean, or me if you have any questions as you’re working on this. Looking forward to seeing your work on Friday, December 13th!

And a note about course evaluation. We’re using Brown’s online course evaluation system. Please be sure to fill out the forms. The official language from the registrar: “As is the
case with all course evaluations, your comments will be completely confidential and will not be made available to me until January, well after the semester has ended and final course grades have been submitted. You can access the evaluation form for this class through your secure page in self-service Banner.”

Please include in your evaluation of the course any comments and advice on the labs; we’ll pass that along to Jean.

No class today, 11/25. Use the time to work on your papers and presentations. Please contact Massimo, Jean or me if you have questions as you work on these, or if you’d like to talk about your project.

Presentations next week. 10-15 minutes each. Talk about the project, your results so far, the questions you’re still working on. I’m looking forward to this.

Here you can get an idea of the project she will be presenting:

(I am sorry for the delay, I just got back my macbook fixed)

As both Valeria and professor Riva pointed out in their blogs, the widespread diffusion of affordable 3D printer has the potential to influence the standardized top-to-bottom model of production (perhaps, as Eco says, toward a complete ‘triumph of consumer ideology”). I do think that 3D printing can deeply reshape the relationship between consumer and producer, where the consumer becomes the ‘ total-maker’ or at the least the creative mind that leads the concrete production of the objects. There are many collaborative production platforms (3DHubs is one of them) based on this idea. Of course, such a production model can become an effective alternative to the established one only if 3D printing technology will greatly improve in the near future; Neely and Langer seem to be very confident about that.

Along with all the beneficial effects associated with 3D printing (in terms of research, teaching and learning), what I find most fascinated is the dialectic relationship between different media that the “flip-flop” process implies; or, more precisely, the dialectic relationship between the creative thinking peculiar to each media. Is this just the synergy of two creative approaches or maybe an entire new one, more complete and better suited for the ‘concretely virtual’ world in which we live?

Using Sloan’s recipe as a guide…

1. Carve a statue out of stone. PHYSICAL

2. Digitize your statue with a 3D scanner. DIGITAL

3. Make some edits. Shrink it down. Add wings. STILL DIGITAL

4. Print the edited sculpture in plastic with a 3D printer. PHYSICAL AGAIN

… I would put the emphasis on the blank space between 3 and 4 (or 1 and 2) rather than on one of the four steps.

Remember, no class next Monday. Lab Thursday in Jean’s office, for advice on individual projects. Work on your papers – come talk to Massimo or me about them if that would be useful. Presentations, 10-15 minutes, on 12/2 – we’ll continue the following week if we need to. Final papers/products due 12/13. Happy to look at drafts. 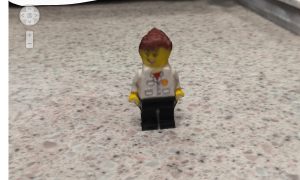 Not too bad a capture of the little lego scientist! (Click picture for the 3D version.) Take a look at the 123D site more generally and try out the capture and manipulation programs.

VInce Rossi’s and Adam Metallo’s presentation yesterday suggested some real possibilities for using 3D scans of art-historical artifacts. Laser scanning might be a tool that makes some of the ways of knowing of conservators open to a larger audience. (I’m thinking of the view of the cross-section of the Buddha, and the close examination of tool marks.) The opportunity to do an object tour provides some new ways to encourage close looking, or looking from different points of view. It makes me wonder what kinds of objects might be most usefully visualized in this way.