I am taking Grafton two ways. One is that he is, useful to our purposes, telling a story about a network which we then see on the mapping the republic of letters website.  The other is that he is telling a story about knowledge acquisition and cooperation relevant to scholarly exploration, visualized or no. As Nicole pointed out, Grafton stresses the general knowledge of a single scholar. While stressing the breadth of the individual, however, he is also revealing the ways in which such wide knowledge depended upon a system of connections. We seem much more enabled to make such connections now and I think that by and large people take advantage of this ability, though perhaps not with the same sense of urgency that the difficulty it posed in Locke’s and Voltaire’s time might have inspired. All of which is just to say I find it useful to think on this model both as network data and as a reflection on the use and function of networks. One thing that strikes me as particularly important, then, is that it would seem much of this correspondence had a specific intended audience and was in response to particular questions risen in the back and forth. Perhaps that is an idealistic view to imagine the republic of letters was fueled by genuine curiosity more than vanity or networking for networkings sake, but true or no it points to the ways in which the intention and nature of the exchange seem as important as the means and content.

A second, not especially related response I have to this week’s topic is a question I have been thinking about for awhile: When is a data visualization a work of art? Because they aim to be, and often are, quite aesthetically pleasing, network visualizations seem as good a place as any to interject such a question. In poking around a bit I found this man, Martin Krzywinski who is working on hive plots, 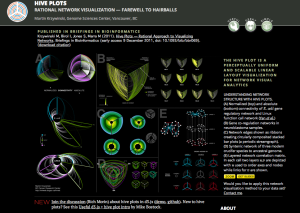 which he seems to feel are useful for observing data, but he also is taking issue with the ugliness of “hairball” network visualizations. Of course appearance and legibility and usefulness are all related. He is also working, however, on  this: 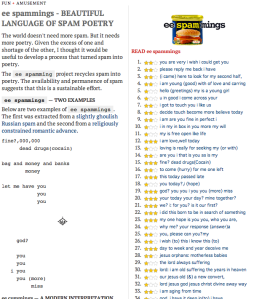 e.e. spammings, filtering spam to create poems in the style of e.e. cummings. The second is very clearly a move from useless data to art. What of the first? Can useful data be art or does it, should it, always serve a purpose? I know, I am going down a rabbit hole by suggesting art is art because of its lack of utility. I don’t really want to open up a ‘what is art’ debate, but I am very curious about what sets the boundaries of a visualization project in the digital humanities.