I am really interested in the Canada Through a Lens: the British Library Colonial Copyright Collection, for which a “hotchpotch of imperial muddling, colonial making-do and individual protectionism developed a collection of photographs that covers the length and breadth of Canada.” It is interesting in of itself but even more so as a product of the happenstance of bureaucracy (having to do with copyright). I wonder, in light of this week’s readings, what the limits are of viewing the somewhat arbitrary as generative of new connections. This is of course, not an entirely random collection. It has been curated and covers a particular place for a particular span of time; yet its subject matter is seemingly delimited most by what was of interest to photographers of the time rather than a central question, style, or event a collector desired to cover. As such, it has the effect of presenting a view of the preoccupations of the day, from the mundane but perhaps aesthetically pleasing or comfortingly familiar to the potential to build narratives (like the men above struggling to ride into the twentieth century) or capture strange occurrences. It is, as I suspect Daniel is suggesting, perhaps a bit naive to assume that free wandering is possible and always desirable. All the same, I find collections such as this that come together through a variety of circumstances more so than out of an active search, have the benefit of raising more questions (because they are not themselves the answer to one in the same sense). 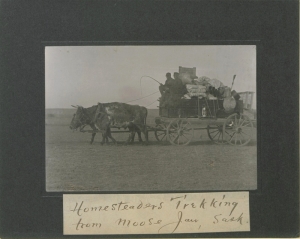 I didn’t have the opportunity to get through all of it, but I think it would be quite interesting to look at such a collection in conversation with Daston’s Wonders and the Order of Nature. Daston states that wonder once existed (and does so again) on the margins of the natural. I think that in a very plain sense we see that here. A train is not so wondrous as a train derailed; a bear or a man of less interest when not embracing. They are captured just on the edge of their natural state. Yet there is so much of the mundane in this collection as well. Is this an echo of the golden period Daston is tracing, before the Enlightenment shunned the act of wonder form scientific inquiry, when the wondrous was for a moment a central concern? True their status as art objects may bespeak their marginality, fitting the notion that they do not belong properly to the categories of the sciences of greatest interest to Daston. Even so, her ways of thinking about where the wondrous fits in is compelling when facing any collection. Is wonder what propels the collection or what I bring to it? Do these photos I am calling mundane take on appeal only as the scenes they depict become antiquated? Is it possible we find wonder in the everyday only in the context in which we become hyper-saturated with the fantastic and, as in more modern photography and film, impossible?